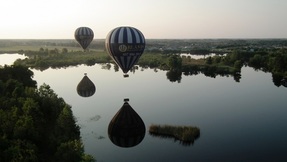 Today we took a flight in a hot air balloon with Orlando Balloon Rides.  It's something we have wanted to do as a family for a long time but just never got round to it.  Partly because the cost put us off (it's usually over £100 per person) and partly because we always have other things to do.  But, as a birthday present for David we decided to stump up the money and go for it.  Orlando Balloon rides were running a promotion which took the price down to £80 per head - and they had some excellent reviews on TripAdvisor - so we signed up with them.
We were required to be at the Orlando Sun Resort at 6.15 am (a bit early for Teenager 2, Owen) before heading off to the launch site.
After Teenager 1, Theo, had helped to inflate the balloon, we were airborne. The balloon can accommodate 16 people, plus the pilot and ours was full.  As a familiy of 4 we had our own little compartment but it was a bit of a tight squeeze.  There were 3 large Americans who had filled their compartment completely; they were suppposed to share it with a single french guy but he took one look at the lack of space and negotiated with a family who had small children to let him share the compartment they were in!

As we set off, the sun came up and we drifted across orange groves.  Most of central Florida is green - when you're driving around you have no sense of the vastness of the trees, lakes and swamps that surrounds the roads, shops, hotels and attractions.  The balloons can't fly over Disney property - you can only see some of the buildings like Epcot and the Swan and Dolphin Hotel in the distance so most of the time all you can see is greenery, the road network and residential housing.   I can't say it was a life changing experience but it was well worth the money and our Pilot, Damien was great. (He deliberately steered us into the odd tree to amuse the Teenagers!).  After the balloon ride, we came back to the Orlando Sun Resort and had a buffet breakfast - not the best buffet in the world but as we were all really hungry we managed to eat quite a lot - especially the Teenagers!

My tip for this (and other large balloon rides) is to make sure you travel in one of the front facing compartments.  Let me explain: there are 4 compartments to the basket, one in each corner.  But the balloon travels in one direction so if you are in the compartment that is, in effect at the back (i.e you have a compartment in front of you when facing the direction of travel), it is very hard to see over or between the people in front of you.  You have a great view of where you have been, but can't see where you are going. 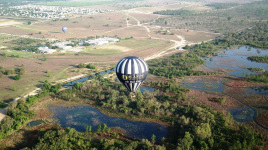